The trains were marvelous, and the train employees very nice and helpful. While my definition of speaking a "little Italian" means that I can ask and understand directions, comment on the weather, and order food - Italians seem to define a "little English" as being unable to fully conjugate every verb - in other words, nearly everyone I talked to spoke English very well. I found that if the person said they didn’t speak English, when I tried to speak Italian, it would turn out that they did. (I don’t know if it was due to gratitude that I tried to speak their language or in horror at what I was doing to it!) I had no problems getting money from the Bancomats using my Mastercard. 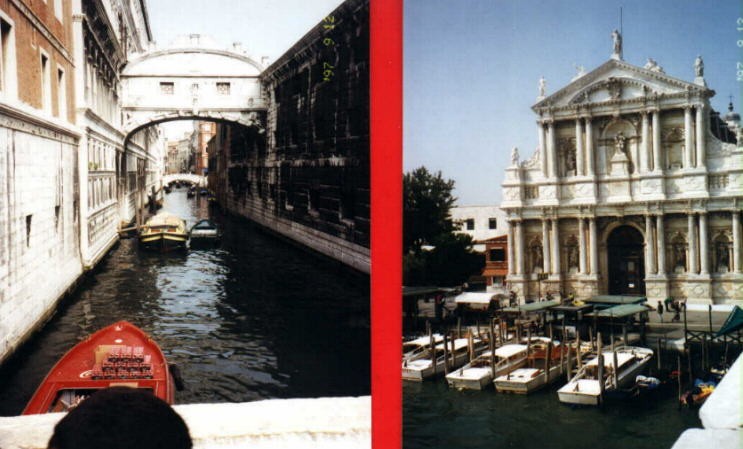 Venice, and I know I’m in the minority, but I was underwhelmed. It was so crowded with tour groups, I ended up going more into the city, away from the Grand Canal. It was also the only place someone tried to unzip my purse. I hit his hand and he just looked at me innocently and walked away. I enjoyed wandering around away from the Grand Canal. Getting lost is not a problem here - it's an island, you can't get too far off track! 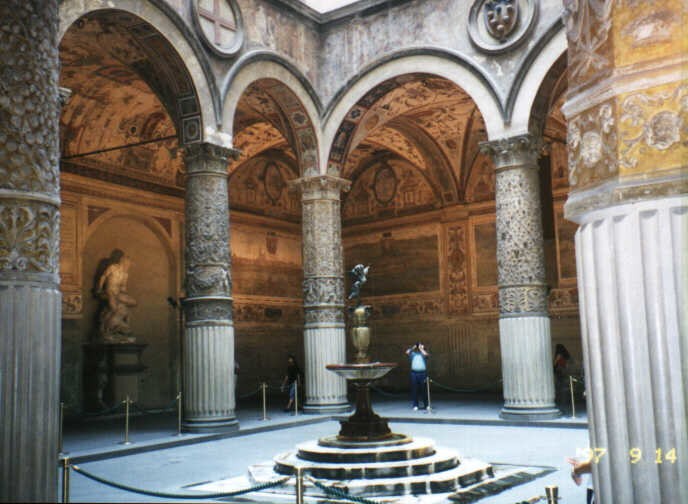 Florence was my favorite town. This is the home of Michelangelo’s David and the Uffizi. The long line at the museum looked threatening, but moved very quickly. At museums and churches - don’t forget to look up, some of the best art is on the ceilings. This was especially true at the Pitti Palace, where the ceilings had the themes of the ancient Roman Gods. 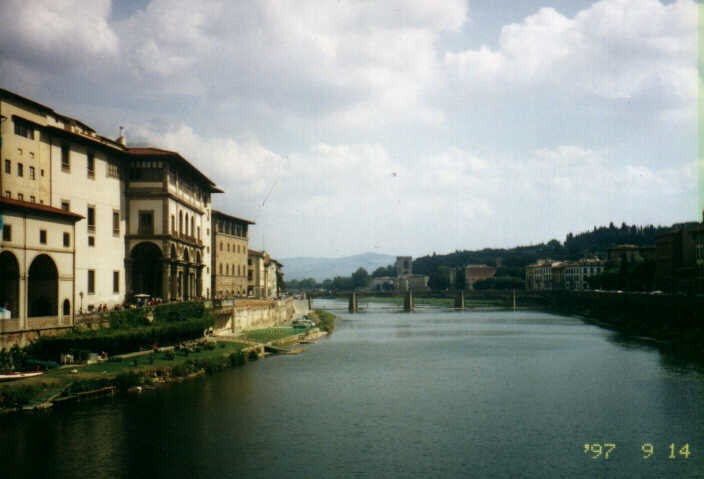 My hotel in Florence overlooked the Arno River near the Ponte Vecchio and its jewelry shops. 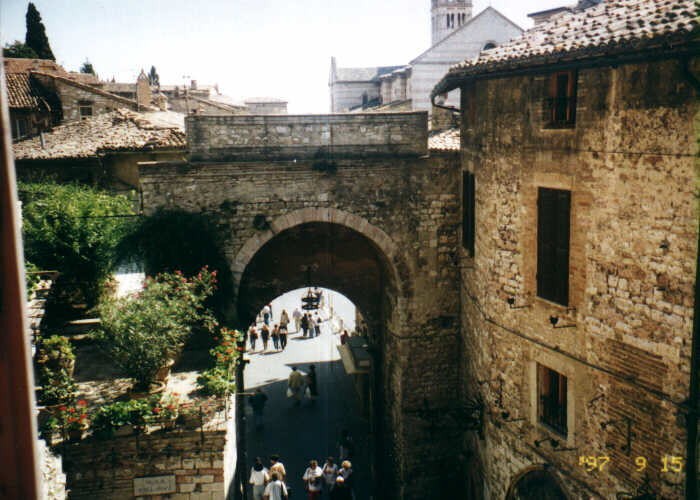 Next, I went to Assissi to my beautiful room at Hotel Sole. This is a truly beautiful area. The church of St. Francis was beautiful, but so ornate - it seemed an incongruous monument to a man who believed in simplicity and poverty. (I was there a couple weeks before the earthquake.) St. Clare’s church was simpler, and the church that was built over St. Francis’ parents home was nice. This view is from my balcony towards St. Clare's. 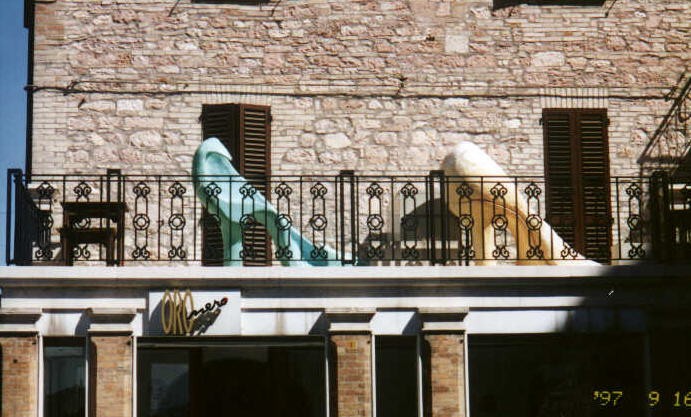 There's a new(er) part of Assissi down the mountain from the area with St. Francis' church. These big shoes were above a shoe store. I just liked them! 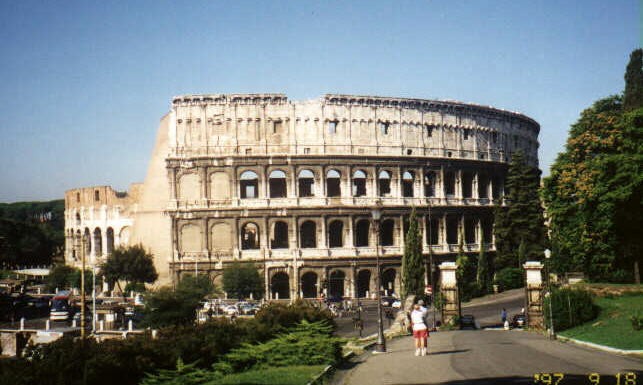 My first view of the Coliseum in Rome! Apart from the Coliseum, the ruins were more ruined than expected. They sell a nice book called Rome Past and Present that has pictures of the ruins with overlays of what they were thought to have looked like. 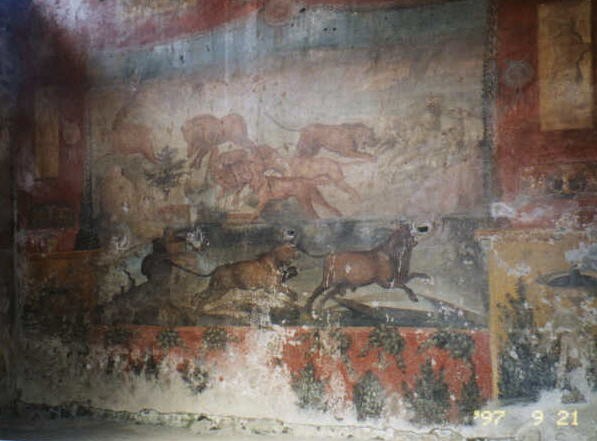 Pompeii - I loved this place! (I also got a Past and Present book there, though Pompeii is much better preserved.) The streets, the temples, the amphitheater, it really gave a feel for the ancient Roman life. This is a mural on one of the walls. 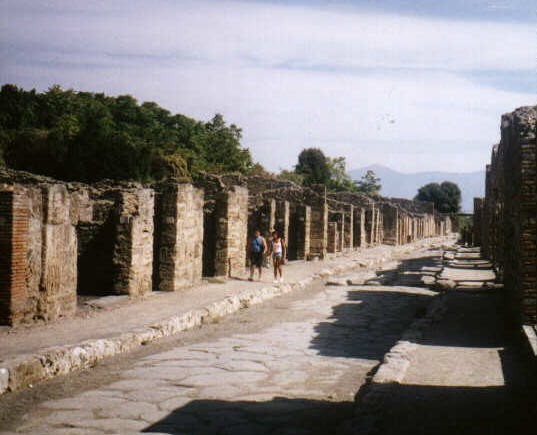 A typical street in Pompeii. 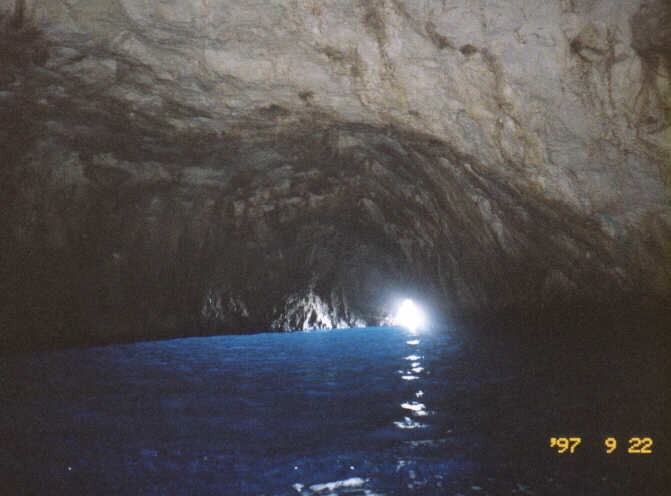 Stayed in Sorrento (very cute town, but very tourist-laden) and went to the Isle of Capri to see the Blue Grotto and relax. The Grotto was eerily beautiful, but the entry is very small and you have to lay in the bottom of the small rowboat to go in.

My niece Dana (who joined me in Rome) and I finished up the trip with a stop in Pisa on the way to Milan. We did a little window shopping in Milan, but we were out of time to do much more!