To enter Russia, I needed to get a visa, which included getting an invitation from someone in Russia. The hotel I reserved provided the invitation, and I went through a company to get the visa since there is not a Russian Embassy in Chicago. The process went easily and fairly quickly. I took the train from Helsinki to St. Petersburg. It was a nice ride and customs/border crossing was handled during the trip. 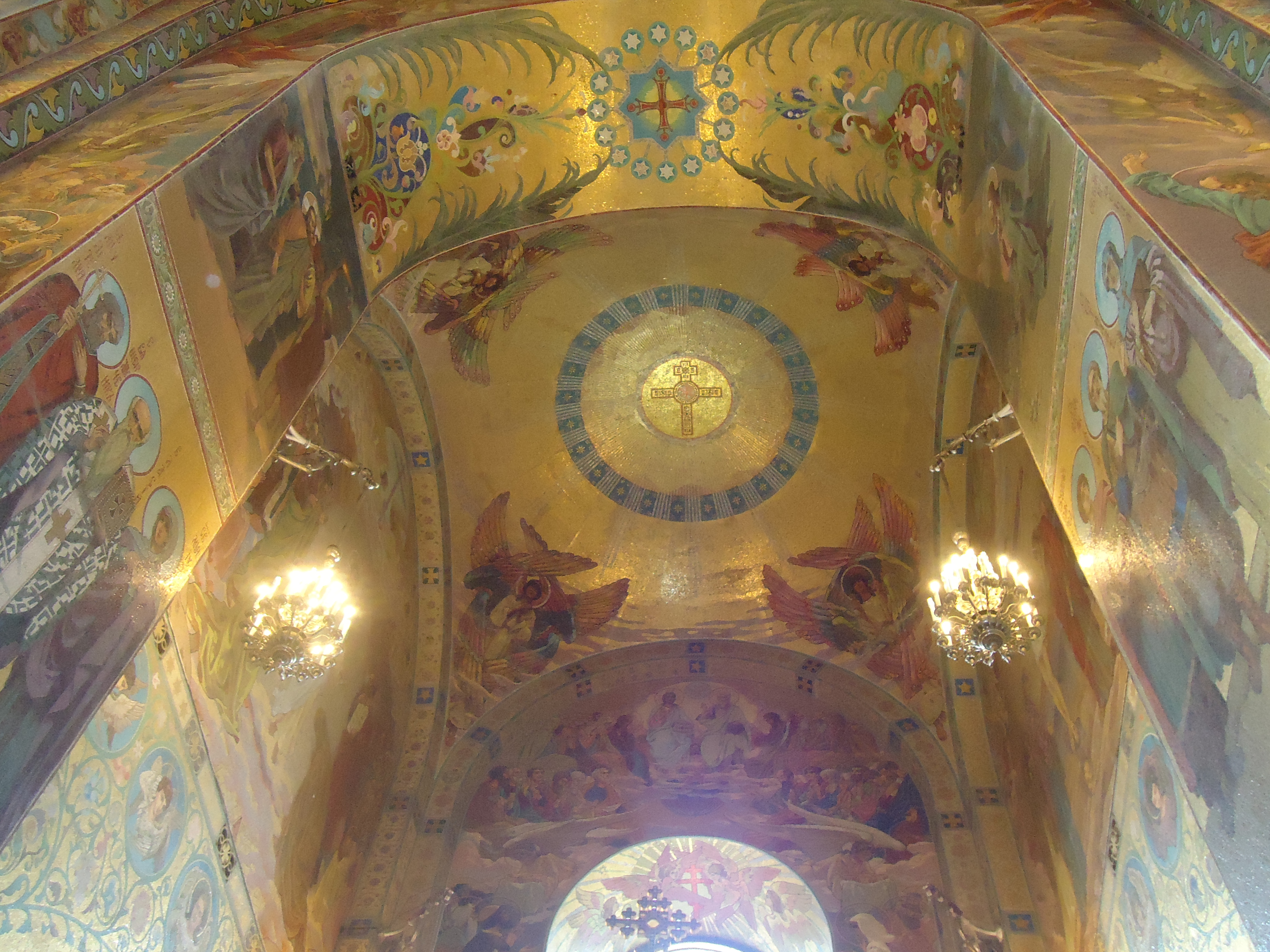 The Church of Our Savior on the Spilled Blood, this church is so gorgeous, pictures do not do it justice. It was built on the spot where Emperor Alexander II was assassinated in March 1881. The church was built between 1883 and 1907 and was officially called the Resurrection of Christ Church. The construction of the church was almost entirely funded by the Imperial family and thousands of private donators. Both the interior and exterior of the church is decorated with incredibly detailed mosaics, designed and created by Russian artists V.M. Vasnetsov, M.V. Nesterov, and M.A. Vrubel. Interestingly, despite the church's very obviously Russian aspect, its principle architect, A. Parland, was not even Russian by birth. The church was closed for services in the 1930s, when the Bolsheviks went on an offensive against religion and destroyed churches all over the country. It remained closed and under restoration for over 30 years and was finally re-opened in 1997 in all its dazzling former glory. 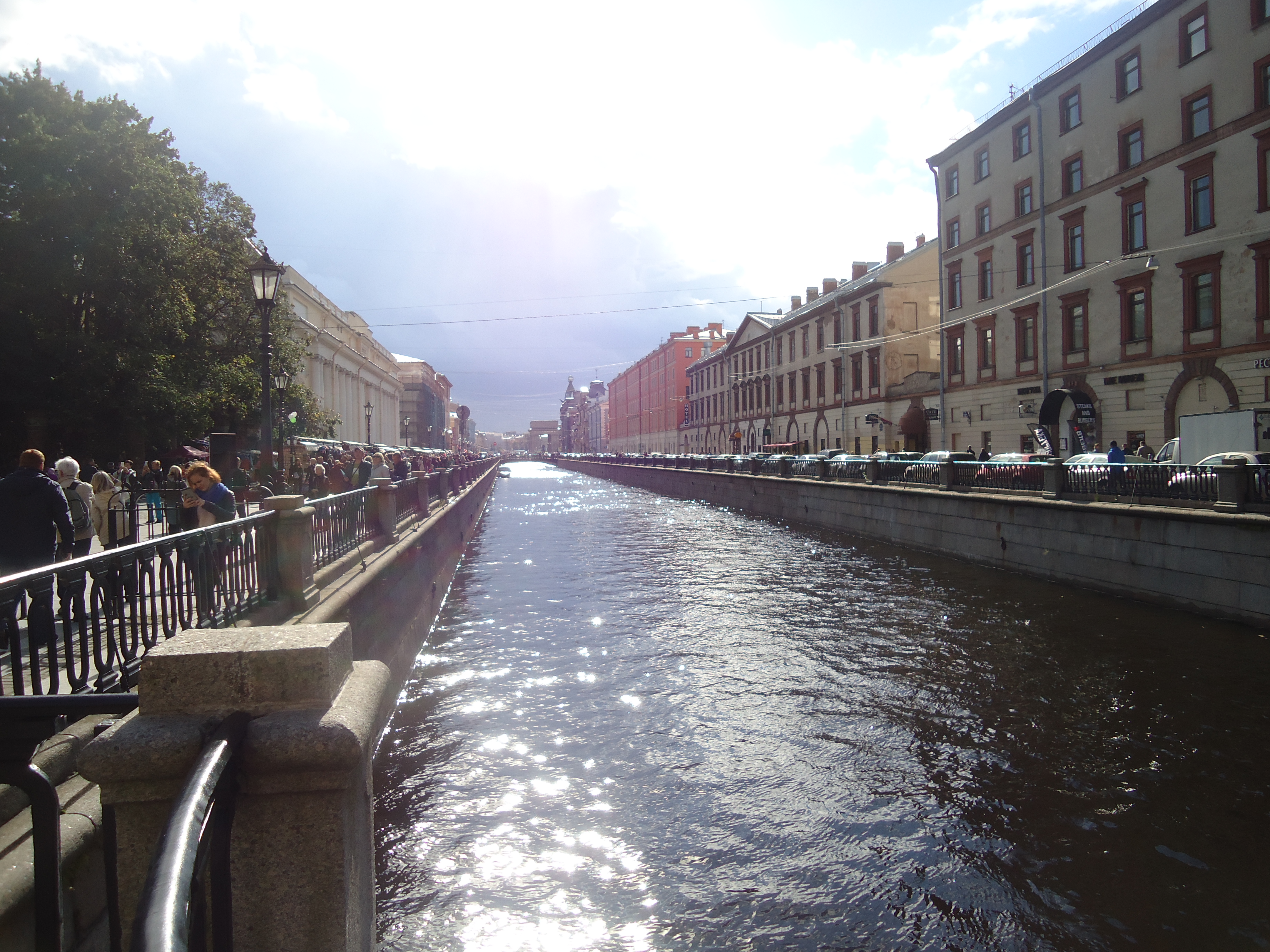 Built across the marshlands of the Neva River delta, St. Petersburg is interlaced with around a hundred tributaries and canals with a total length of 300 kilometers and over 800 bridges crossing them. In the city center, St. Petersburg's famous granite embankments are home to many of the city's grandest buildings. I hired a guide for a tour of the city as well as a boat trip through the waterways. 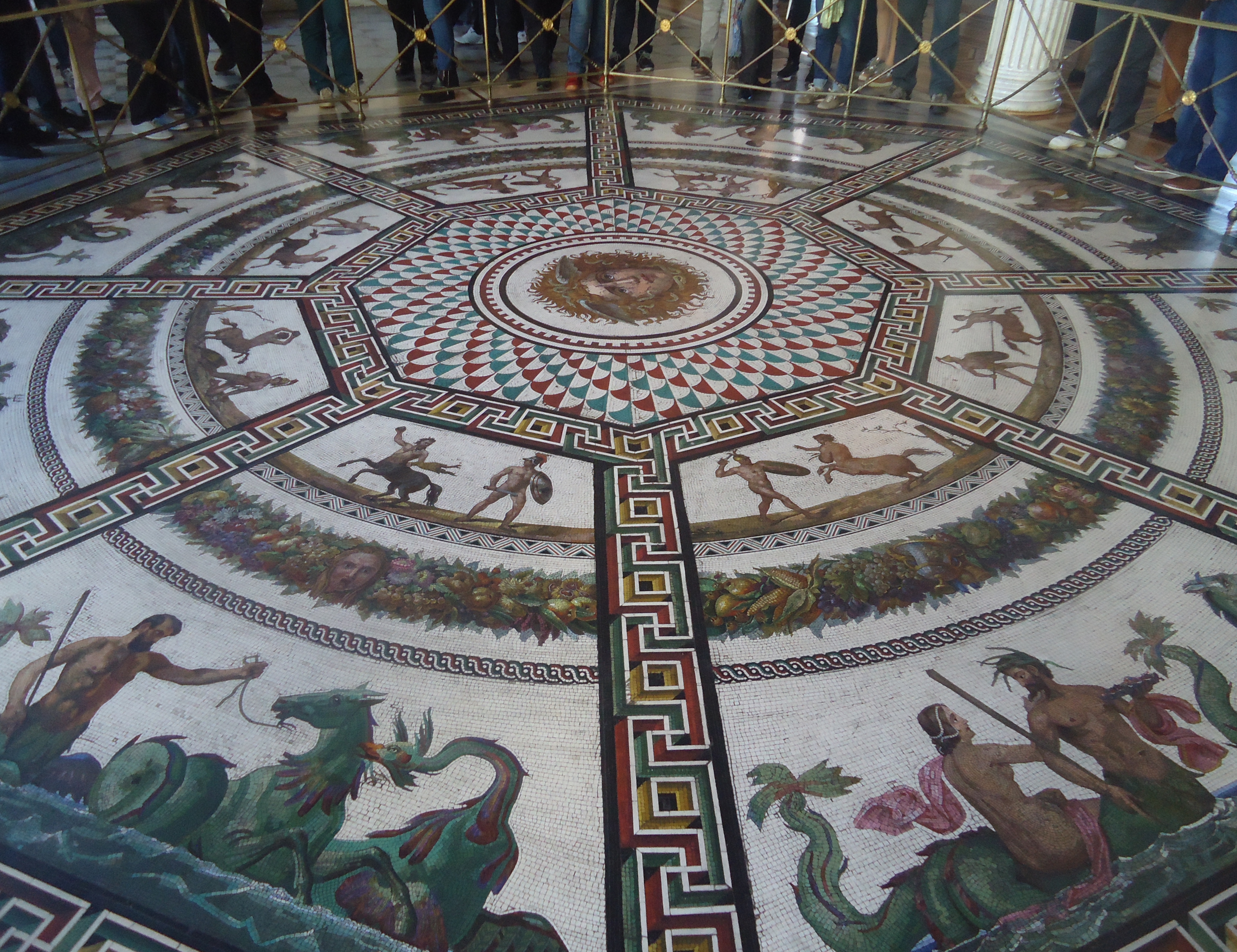 Floor mosaic in the Pavilion Hall of the State Hermitage Museum, St Petersburg, Russia, 1847-1851. The mosaics are a copy of the ones unearthed in 1780 in the ancient Roman bath at Ocriculum (Otricoli), Italy. The Hermitage was originally the Winter Palace of Empress Elizabeth Petrovna. It's so big, it would takes days to see everything. So I concentrated mainly on furniture. 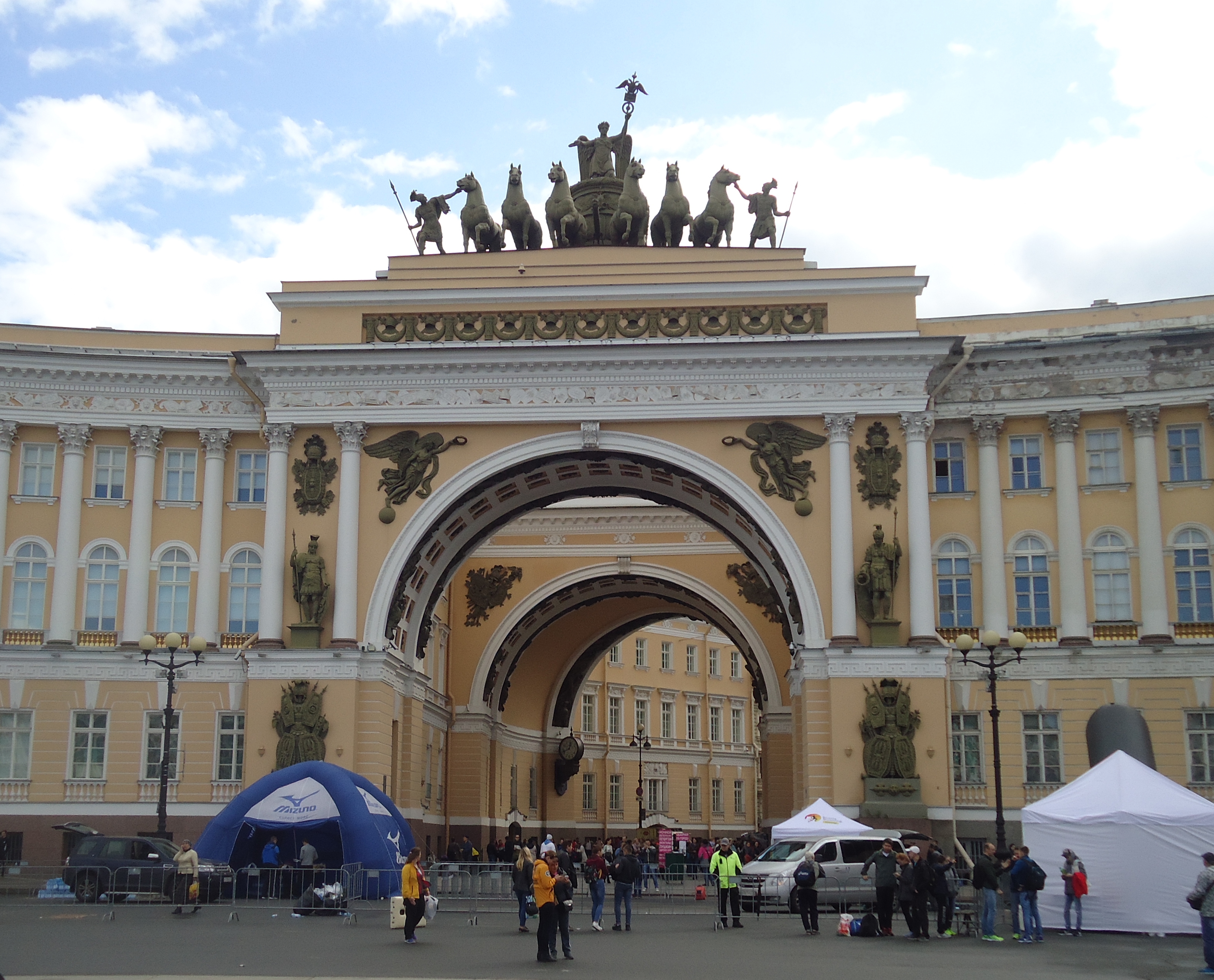 The former building of the Imperial Army General Staff, built between 1819 and 1829 by the Italian architect Carlo Rossi. The building encircles the Southern side of Palace Square and its central arch is designed as a Triumphal Arch in classical architecture. Palace Square is huge, but surprisingly has no benches to sit and enjoy the sights. 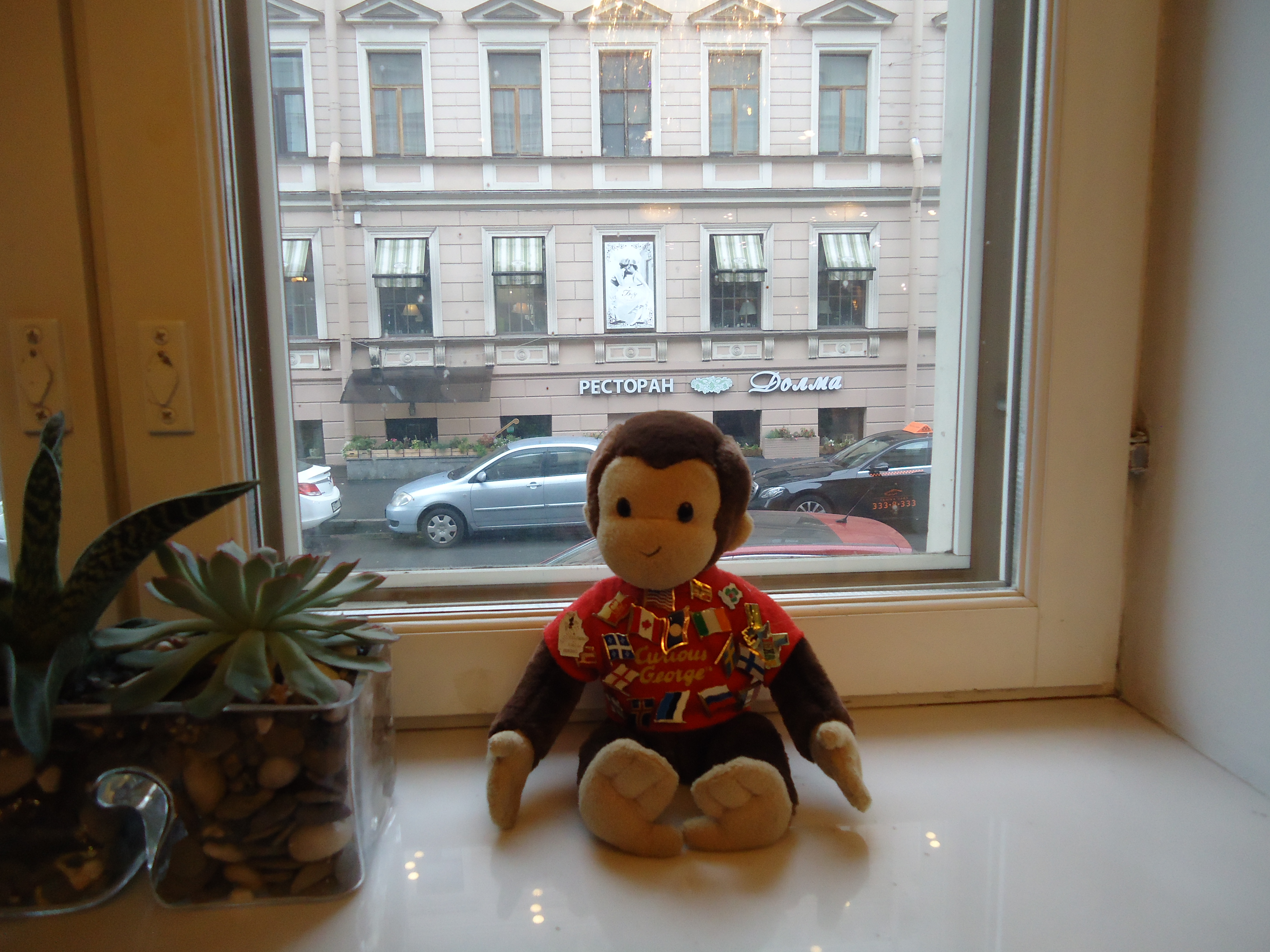 Since I travel alone for the most part, my Mom gave me Curious George to keep me company. He gets a pin from each county he has gone to and wears them with pride.